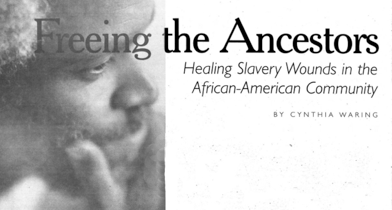 October, 2002 When we were slaves, we left our bodies. We are still living outside of our bodies. I’ve asked you here to find out where we went.” This is what Pastor Johnny Ray Youngblood told me when we first met. The head of the St. Paul Community Baptist Church in Brooklyn, N.Y., Youngblood had discovered my book, Bodies Unbound (Archer Books), and was intrigued by its title. Upon reading it, he said, he became fascinated by what people discovered about their lives when they were massaged. His interest brought me to the basement of the St. Paul Community Baptist Church. I was here to hold two workshops with 18 people in each, all part of a healing circle at St. Paul. Most of them had read my book. Many had studied healing for years and were wiling but anxious to have me read their bodies. Up until 20 minutes earlier, I hadn’t even known this was an all black congregation. I was in a state of great uncertainty, as I had rarely worked on black-skinned people other than those who were members of essentially white community, married to white friends and so on. The people of St. Paul are part of a black community, so this was a new experience for me. I have given over 20,000 massages in my 26 years of experience as a massage therapist. As people have remembered traumas from their past while I massaged them, I’ve remembered my own. I have studied, through experience, how families pass along unresolved conflicts for generations. I have put together a system of reading bodies which brings to conscious awareness trauma that has been repressed. I was teaching a class at the Ojai School of Massage when I learned that I was reading bodies. A student asked me to show the class how I worked with my clients. I asked for a volunteer and a woman who carried a “mother wound” lay on my table. I asked her to tell me about her mother, and she said her mother died when she was very young and she’d felt abandoned her whole life. “How did you know to ask about her mother?” The students asked. “Look at her feet,” I replied. “Her left foot is much further out than her right foot. Look how her weight is carried unevenly in her stomach. Her shoulders are rounded, protecting her heart. All these indicate a “mother wound.” Not only were the students stunned, I was as well. Before that moment, I wasn’t sure how I came to know what I did. I didn’t know whether the information was coming through my hands, intuition or whether I was unconsciously observing something. It is my experience that I don’t become aware of something until a situation calls for the knowledge. Since that moment, I have discovered a system that relates the kind of trauma one has suffered to a particular reaction in the body. When I have determined what kind of wound a person carries, I begin to ask questions about that person’s life. In most instances, I can connect the mind of that person to the memory of the trauma. In a matter of minutes, what was unconscious has become conscious. Then the healing can begin.