I am a long time student of the body. I became a licensed massage
therapist in 1976. My first book was published in 1997, entitled Bodies
Unbound: Transforming Lives Through Touch. I also have a book of
poetry called Ruminations of a Woolly Mammoth and perform a
one-woman show based on my life and work. I teach workshops on
reading signs in the body in order to resolve ancestral patterns.
This all came about organically.

I am a long time student of the body. I became a licensed massage therapist in 1976. My first book was published in 1997, entitled Bodies Unbound: Transforming Lives Through Touch. I also have a book of poetry called Ruminations of a Woolly Mammoth and perform a one-woman show based on my life and work. I teach workshops on reading signs in the body in order to resolve ancestral patterns. This all came about organically.

My journey into health food and spiritual practice began at an early age. When I was a young mother at the age of 22, and my son Russell was six months old, I read a report claiming that feeding your child Gerber’s baby food led to many addictions later in life. Not wanting to put anything harmful into his young body I began blending, mashing and steaming all of his food. Later I worked with ten other hippies to start and maintain one of Boston’s first health food restaurants. It was called The Root One. My personal search for health and meaning was driven by a deep spiritual hunger that has been the main focus of my life for the past 40 years.

When I began my spiritual journey, unbeknownst to me, I was alcoholic and dyslexic, with many hidden childhood traumas. I soon discovered that practicing meditation and a healthy diet brought up the fear, anger, and memories I couldn’t face, which led me back into drinking alcohol and bingeing. I lost everything due to these wild mood swings as I lived in a constant roller-coaster of fasting and meditating, then drinking and leading a bipolar life. I eventually gave custody of our son to his father because I knew my son was not safe with me. I didn’t know what was wrong with me and often didn’t know what I would do next.

For a brief time I lived on the streets eating food from cans in abandoned buildings. During this time I worked hard to stay close to my son through weekly visits and letters. The separation was emotionally unbearable for me.

In 1975 I became a massage therapist. I had just left a spiritual group and had no money. Walking through a shopping mall I saw a sign that said, “Masseuse Wanted.” So I applied for the job and was told to come back the next day to massage the owner. A few hours later I saw another sign – MASSAGE. I went in, got my first massage, and memorized everything he did. I went back the next day, massaged the owner of the spa and got the job. I have done body work now for thirty years.

Trying to find my sanity I joined many spiritual groups and practiced many forms of meditation. I eventually found a group dedicated to staying clean and sober in 1980. Their way of dealing with addictions was by working on ones psychological issues and doing service work. It is here I unraveled my childhood issues and learned what they had cost me. I have stayed free of alcohol and any kind of mind altering chemicals ever since.

After massaging over twenty thousand people I awakened to the fact that I was reading bodies. In my exploration of the ramifications of this I realized the information I got from a persons body wasn’t just about the person on the table but revealed ancestral patterns as well. All the unresolved issues of parents and grandparents were being passed down until someone dealt with them (There is more information about this on my web site, www.bodiesunbound.com.). Though I still do massage, my main practice is body readings, which I call Ancestor Work. 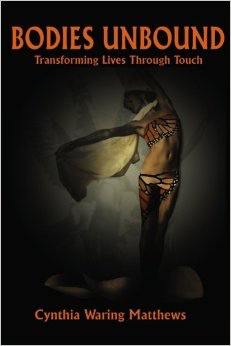 “We store life experiences in our bodies. Waring masterfully illustrates this by sharing her own story and that of her clients, thus motivating us to become aware of our own bodies. I highly recommend this book”Laurie Grant, Reiki Master and Author

so that you can be informed about all that Cynthia offers.